Film Väst is one of Europe’s most successful regional film funds, owned by the Västra Götaland region. Film Väst has placed western Sweden on the map of the world. We are co-producers, co-owners and financiers of 30-40 Swedish and international feature films and as many short films and documentaries, as well as TV dramas per year. Since its beginning, in 1992, we have co-produced around 600 films.

Scandinavia’s most successful co-producer
It is the task of Film Väst to assist in the development of creativity and competence in order to achieve the highest quality film and TV production in Västra Götaland. This also includes fostering talents that can establish themselves professionally. Film Väst has over the years deliberately built long-term relationships with Swedish and international production companies, directors and other creative professionals. The result has been that a wide range of domestic and international production companies have allocated their productions to western Sweden with an emphasis on Trollhättan and the surrounding area. That is why we have been nicknamed Trollywood.

Western Sweden’s Film Industry
Trollywood includes not only Film Väst but also a large number of companies involved in post production (processing of sound, light, visual effects, grading, etc.). We also have skilled craftsmen in stage design, painting, carpentry, lighting and much more that is needed to produce movies. Västra Götaland is also a significant exporter of qualified film crews. Studio Fares, located in the same building as Film Väst, is one of the largest and most modern film studios in Scandinavia with its 1,000 square meters of floor space, eleven foot ceilings, a carpenter’s workshop, storeroom and production offices.

The Audience and International Festivals
Film Väst has explicitly stated that their goal is to be one of Europe’s three most successful regional film ventures both artistically and for the audience. The goal is each year to have at least one of our films selected for the main competition at the prestigious festivals in Berlin and Cannes. They will also be represented at the international A-film festivals like Venice, Toronto, Sundance, Tribeca, San Sebastian, Locarno, Busan, and Tokyo.

Film Väst also creates a selection of films that everyone in Västra Götaland can enjoy at the movie theater, on TV or online – regardless of age, gender or social class. Our co-productions will top the movie charts in Sweden and, hopefully, internationally, attract an audience of millions.
Best movies 2014: Hundraåringen som klev ut genom fönstret och försvann with 1.6 million movie goers (the largest Swedish film success since the 1970s). Other popular movies last year were: Monica Z, the Sune films, Bamse och tjuvstaden, Känn ingen sorg, Mig äger ingen, and Snabba Cash III.

International Success 2014
Thomas Vinterberg’s film Jakten with Mats Mikkelsen was both Oscar and Golden Globe-nominated. In Cannes tribute was paid to Ruben Östlund’s Turist and Kornel Mundoczòz White God . Film Väst brought five co-productions to the A-film festivals in Berlin, two to Tribeca, three to Toronto and two to Venice. At home, the co-productions won eleven Guldbaggar (golden bugs) and the Audience Award. 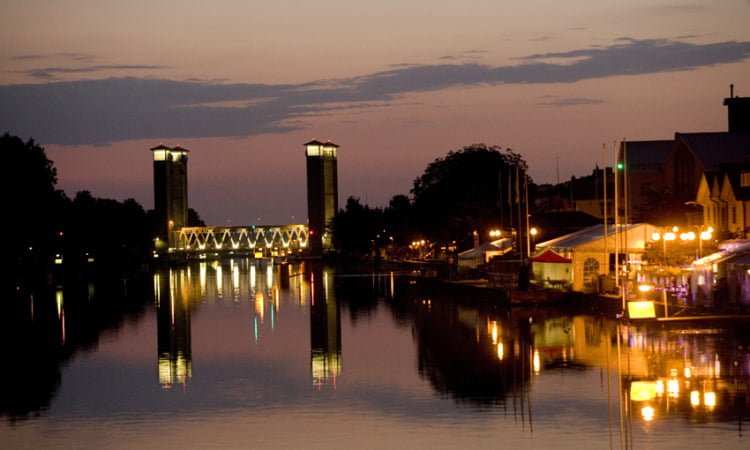 Would you like to host a conference or a congress in Trollhättan ?

Then you can turn to Trollhattan Convention Bureau. We are a non-profit, neutral organization and we will assist you to present Trollhättan to decision-makers and to the board, to prepare the meeting application, to organize viewing trips, to make preliminary reservations for hotel- and meeting venues, to make suggestions for extra activities and, to a certain degree, we can even help you with marketing your meeting.